In Ethiopia, 80 percent of the population resides in rural areas and women provide the majority of the agricultural labor in these communities. However, their contributions often go largely unrecognized and the traditional norm often restricts them to access resources and community participation. Worse, one in three women experience physical, emotional or sexual violence, 65 percent of women have experienced female genital mutilation, and only half of girls who enroll in primary schools ever make it to complete.

In the past thirteen years SHAPEthiopia has been engaged in implementing different programs and projects that have contributed to empowering marginalized women in different districts of  southern Ethiopia ,socially , economically and politically. We have set goals that would contribute towards the national efforts to eliminate all forms of violence against women and girls, all harmful practices, such as child, early and forced marriage and female genital mutilation and ensure women’s full and effective participation and equal opportunities for leadership at all levels of decision-making in political, economic and public life.

Our all inclusive developmental endeavor has begun to change the lives of hundreds of poor widows in rural Ethiopia. Through our women empowerment programs, widows in the districts like Boricha, Shanto, Humbo and Hawassa, who were engaged in animal husbandry, crop production, hand craft and small business have became self reliant and began to generate additional income and improve their livelihood.

The theme for International Women’s Day this year is, “Women in leadership: Achieving an equal future in a COVID-19 world on the way to the Generation Equality Forum”.

International Women’s Day is celebrated annually on 8 March. It offers us an opportunity to reflect on progress made, to call for change and to celebrate acts of courage and determination by ordinary women who have played an extraordinary role in the history of their country and communities.

Previous Story
Widows who have made poverty history 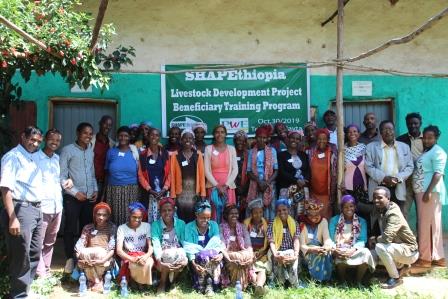 Martha Becho, 42, is a widow living in southern Ethiopia,...